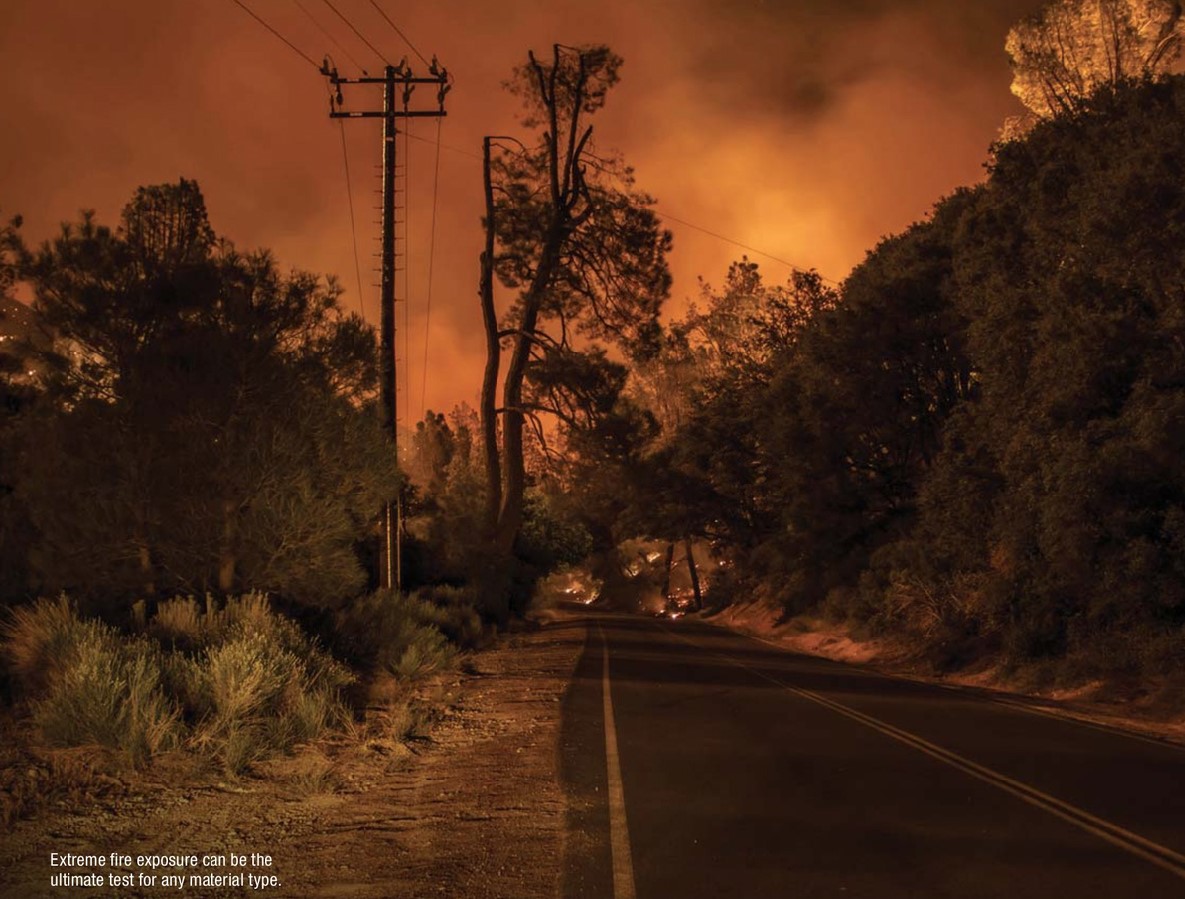 A recent study by the journal Nature predicts an increase in the length of the California fire season from 36 days per year up to 58 days or 71 days, depending on moderate and high emission scenarios, respectively. An extended fire season means the threat of fire will start earlier in the spring, when historically there has been enough moisture to reduce fire threats, and extend later into the fall, which is particularly challenging considering the problematic combination of strengthening regional Santa Ana winds, which are associated with the lowest relative humidity of the year in Southern California, and already dry vegetation.

Confirming this ominous trend, in the last five years, California endured 13 of the 20 most destructive fires in the state's history. With larger and more devastating fires now becoming the new normal, the term gigafire has emerged to label fires with over 1 million acres (404,686 hectares) burned.

Prevention is one component of SCE's strategy, manifested by the replacement of bare conductor with an insulated, covered conductor. However, with 1.4 million poles in its grid - most of which are wood - SCE also needed a proven wildfire hardening solution for poles to support the new, heavier covered conductor.

Although it is the most prevalent material for distribution poles, wood is combustible. Steel poles are conductive and, in studies conducted by SCE, have the low potential to initiate wildfires under certain conditions. Concrete poles are too heavy to install in the remote areas of SCE's service territory. Because they do not support combustion and they are the most wood like (that is, they can be drilled in the field), composite poles quickly emerged as a front runner for consideration in SCE's wildfire-threat mitigation strategy.

Two general polymer categories exist: thermoplastics and thermosets. Thermoplastics, also known generally as plastics, are items like a water bottle or the molded bumper cover on a vehicle. They are formed from pellets or powder using heat. Thermoplastics are not structural materials, so they melt when exposed to heat.

Thermoset materials are entirely different than thermoplastics. Thermosets are composed of two components - a resin and hardener - that are mixed to create an exothermic reaction resulting in an irreversibly cured solid. When combined with a reinforcing fiber like nonconductive electrical glass, or E-glass, a structural element known as fiber-reinforced polymer (FRP) composite is created. Because thermosets do not melt when exposed to fire, they maintain their form.

The non-combustible performance characteristics of composite materials are widely understood. However, extreme fire exposure can be the ultimate test for any material type.

Although composite materials do not support combustion, their surface can char with sufficient heat flux exposure. Historically, flammability tests for polymer materials relied solely on laboratory-based tests initially designed for the home appliance market. While effective for their intended purpose, these coupon-scale tests did not realistically simulate the intensity of a wildfire, which has been described by wildfire survivors as a huge wall of fire.

Going back to 2011, composite pole manufacturer RS Technologies set out to design a full-scale test that would represent a severe wildfire moving through a utility line right-of-way. Partnering with a fire expert from the University of Alberta, Mark Ackerman, a test method was developed. The test parameters were established based on known wildfire characteristics:

The total heat flux, or total amount of energy, of the fire depends on many factors, including fuel type, quantity, moisture content and fire duration.

The RS-Ackerman full-scale fire test method starts with a full pole embedded in the ground, with an embedment depth consistent with an installed pole. Next, a 10-ft (3-m) tall steel shroud is installed around the base of the pole. The shroud has three holes spaced at 120 degrees around the base, which allows for three propane-fed burners to deliver the flame exposure.

Typically, the test is run for either a 2-min burn or 3-min burn. This establishes the performance on both severe and extreme fire scenarios, respectively. The peak temperature of the test is 2332°F (1278°C) with a total heat flux of 16,540 kW-s/sq m, which is applicable for the 3-min exposure version of the test on the RS Fire Shield, a composite shell made from the same materials used on any round cross-section pole, including composite poles, to provide extreme fire protection. After the exposure duration has been achieved, the fuel source is turned off and the steel shroud removed.

The RS-Ackerman test duplicates both radiative (the transfer of heat without any physical contact) and convective (the transfer of heat from one place to another by the movement of air) heat flux exposure. Utility pole heat flux exposure depends on whether the energy transfer is purely radiative, where the surface is not contacted by flames, or a combination of radiative and convective.

Perhaps the most important element in the RS-Ackerman fire test is the post-fire exposure strength test. After the steel shroud is removed, the complete pole is extracted from the ground and loaded into a test fixture to complete a vertical full-scale bend test to failure, based on ASTM D1036. The bend test is intended to quantify any loss of strength resulting from the fire exposure when compared to a pole's mean ultimate failure strength and published strength value.

The composite pole fire test performance was exactly what SCE was seeking to identify a resilient solution in high fire threat areas to support the aggressive plan of deploying 4500 circuit miles (7242 circuit km) of covered conductor. This positioned composite poles as an integral part of SCE's system hardening strategy.

SCE's fire-resistant pole deployment is focused on two areas: ignition prevention and system hardening. Composite poles check both of those boxes for SCE, plus they have the ancillary benefit of woodpecker damage prevention and are environmentally benign.

The fire-resistant composite pole use strategy focuses on critical equipment poles, for additional resistance to tracking because the RS composite poles' nonconductive material and hydrophobic surface characteristics, and woodpecker areas to which composite poles are impervious. The total composite pole deployment strategy accounts for approximately 40% of all poles in the high fire risk areas of the SCE service territory.

After the program commenced in 2018, it was not long until the composite poles were tested with wildfire exposure. The first exposure was the Tick Fire in October 2019, which burned 4615 acres (1868 hectares) in Los Angeles County and validated the performance in fires was the same as that in tests. Located in a region of largely chaparral vegetation, the adjacent wood poles burned to the ground while the composite poles emerged unscathed. On inspection of the poles, they were found intact with no structural damage to the resin and surface. The pole surface did show discoloration from the soot and ash that was flying during the fire. The poles remain in service today.

As time passed, more and more composite poles were installed in the SCE grid and exposed to fires. Time and time again, the poles mitigated the risks associated with fire threat, standing strong. More recent fires in areas with increasingly dense vegetation did prove to have a higher heat flux than the Tick Fire, resulting in some charring of the composite pole surface. The 2020 Apple Fire in Cheery Valley, California, which burned 33,424 acres (13,526 hectares) and Lake Fire in the Angeles National Forest, which scorched 31,089 acres (12,581 hectares), are prime examples. Because of the presence of trees and taller vegetation in the Apple Fire, for example, the composite poles were subjected to a high heat flux. The surface of the poles showed damage to the resin with some loose E-glass fibers. However, the poles remained standing and kept the lines off the ground, resulting in faster system restoration and a reduced outage time after the fire.

Looking to validate its choice to use composite poles in high fire threat areas, SCE wanted to verify composite pole strength after severe fire exposure in the real world. Four RS poles - one 45-ft (13.8-m) pole and three 50-ft (15.2-m) poles - that had been exposed to various actual fires were removed from service and returned to the manufacturer to undergo the vertical full-scale bend test to failure, the crucial performance verification component of the RS-Ackerman fire test method that measures both post-fire strength and stiffness. All four poles tested demonstrated results consistent with new poles and the manufacturer's published pole performance parameters. The fire exposure had no impact on pole strength and stiffness.

Today, fire-exposed poles are inspected and remediation for any surface damage is being developed using a field applied bushed coating that restores the pole surface.

When engineered and tested products like composite poles are put to the test in the field, SCE has found they deliver the results needed to harden the grid and achieve its critical infrastructure performance goals. The performance of composite poles in fire events has increased SCE's grid reliability and resiliency, enabling the utility to restore service faster to customers whose electrical service was negatively impacted by wildfires. All of that also leads to improved system average interruption duration index and system average interruption frequency index metrics.

CLINTON CHAR (Clinton.Char@SCE.com) is manager of the transmission engineering, poles engineering group at Southern California Edison (SCE). He has BSCE and MSCE degrees and is a registered professional engineer with more than 30 years of T&D experience. He is a member of the American Society of Civil Engineers (ASCE) and is currently involved with two ASCE standards committees. He has made numerous conference presentations and published 20 technical papers.

BRIAN O'KEEFE (Brian.Okeefe@SCE.com) is engineering manager and specializes in asset strategy and planning as well as structural asset engineering at Southern California Edison (SCE). In former positions with the utility, he has served as a reliability engineer and a compliance engineer as well as an instrumentation and control engineer at the San Onofre Nuclear Generating Station.